BorisBorisBorisOutOutOut was recorded by Swansea-based supergroup Jacks City Rockers, featuring members of Bandicoot, Helen Love, Creature Sound, DTT, News From Nowhere and White Riot, plus R*E*P*E*A*T Records’ label boss/promoter/writer/outright hero Rosey. It was recorded and mixed by Allen Chambers at Creature Sound, a community venue that offers valuable outreach work for the homeless but which finds itself threatened by the current crisis. The message of its 3 chord 2 minute riotous yelling and yelping is clear, concise and to the point.

“…and if that means some pensioners die, too bad” – Dominic Cummings

They Wants Us To Die
‘They Want Us To Die’ was written in the aftermath of December 2019’s bitter, shameful and not a little embarrassing General Election. It was performed collaboratively by Tundra with Gaffa Tape Sandy, B.U.H, Kulk and Seymour Quigley of Bury St Edmunds peerless legends Horse Party and Miss Black America.

‘They Want Us To Die’ is a three-minute explosion of rampaging garage-punk that sees band members hurling invective at political polarisation, the DWP’s victimisation of vulnerable people, the underfunding and dismantling of the NHS, homelessness, the gender pay gap, illegal wars, the lie of austerity, the media’s complicity in spreading misinformation, the rise of nationalism and xenophobia, and weaponised false nostalgia. The track has been given horrific new resonance by the current health emergency, to which the UK Government’s preferred course of action was to allow the old and vulnerable to die in order to protect the economy. 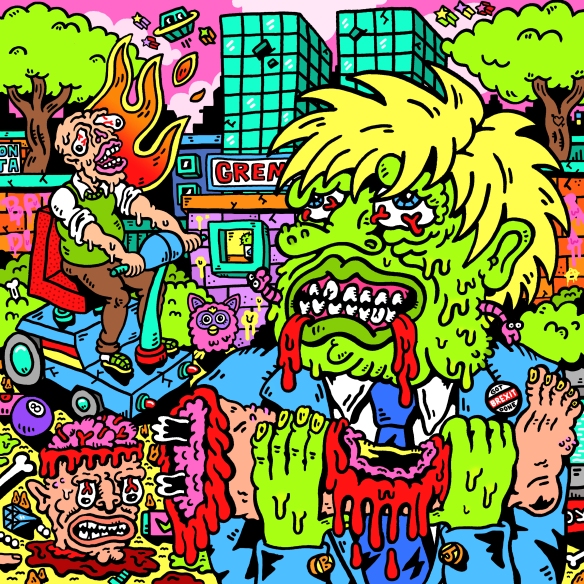 “A discordant nation with no direction/Led by donkeys, led by mules” – B.U.H

‘We Are Flex-Bob-Omb’ is available now on all streaming platforms. As a launch party isn’t currently possible, the bands will use the single’s release as an opportunity to encourage people to donate much-needed food and/or money to their local food banks and shelters.

A limited edition 7″ blue flexi single release of ‘They Want Us To Die’ will follow in May, featuring artwork by acclaimed illustrator Russell Taysom (who recently masterminded an incredible animated video for ‘Never Trust A Man With A Perm’ by Idles). The flexi should be available via mail order only from the R*E*P*E*A*T Records Bandcamp page at www.repeatfanzine.bandcamp.com, and all profits will be split between Gatehouse Food Bank in Bury St Edmunds and Creature Sound in Swansea (who provide much-needed outreach work in the city).