Skip to primary content
Avalanche Party
Share new single ‘Rebel Forever’ and announce US live dates
Debut album ’24 Carat Diamond Trephine’ released November 22nd via So Knee Records
“The most exciting rock & roll band in the UK right now” – BBC Radio 1
“A tsunami of mega riffs and eardrum-popping bass lines. Definitely don’t want to wear your Sunday best to one of their raucous gigs” – NME Magazine
Avalanche Party are the feral garage-punk quintet from the North Yorkshire Moors who’ve built a prominent reputation off the back of their intense and immediate performances across Europe and the US. The band have now shared new single ‘Rebel Forever’, taken from their eagerly anticipated debut album to be release on November 22nd.
‘Rebel Forever’ is a gothic, pulsating album highlight that’s now accompanied by a suitably nightmarish video. Playing out is a dark, paranoid hallucination taking place in a cabin in the lonely northern countryside, we’re invited to take a trip in more ways than one.
They tell us that the new video was “filmed over the course of a few days in deep, dark Berkshire. It shows a trip through time and the great outdoors and has two main stars.
Django is a scaly fiend of the reptile family Chamaeleonidae who spends his time eating rump steak and shedding his dark and succulent past. Ron is a horrible WMC toilet of a cat who would rather the world left him alone.
This broadcast was made possible by Welsh wizard Kyle ‘Eagle Burger’ Howells and his unflinching vigour, boundless generosity and eye for a mood. Rebel Forever.” 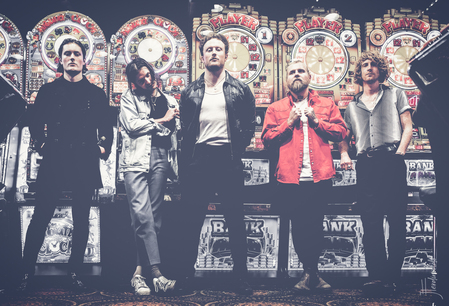